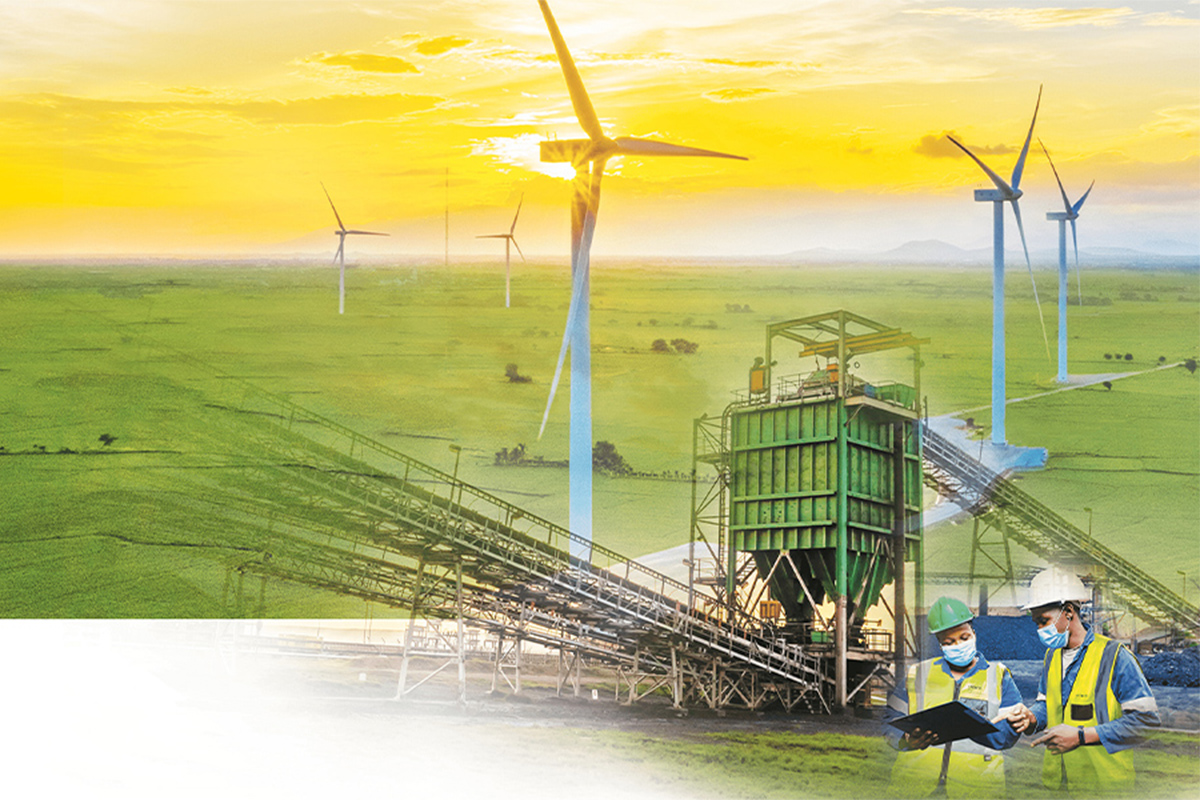 CEO, Mxolisi Mgojo said, “Given the challenges we have faced this year, I am very pleased to present these results, which not only underscore the resilience of our business through continued delivery against our strategic priorities, but also the excellence of our people and management’s ability to take decisive action in a dynamic environment. Our commitment to create long term value for all stakeholders through sustainable business practices, has placed us in a stable financial position, allowing us to announce a total dividend distribution for the year of 3 252 cps.

Poor logistical performance continues to impact our ability to produce and export coal at desired levels, resulting in a year-on-year decline of 37% in our export volumes. Together with the industry, through the Minerals Council South Africa, we are continuing to engage with government and TFR to resolve some of these challenges and take advantage of prevailing high commodity prices.

The cost competitiveness of Exxaro’s operations remains a primary focus, which continue to deliver in terms of cost containment - ensuring cost increases remain well below inflation.”

The shift in energy transition policy has intensified, and ahead of COP26 Exxaro announced its Sustainable Growth & Impact Strategy, outlining its commitment to supporting a just transition towards a low carbon economy through diversification into manganese, copper and bauxite, and expanding its energy solutions business, Cennergi, which will enable the protection of the value of the coal business through self-generation, and build a market position in emerging opportunities for distributed energy. The strategy includes responsibly maximising the value of its coal assets and decarbonizing its operations, whilst rebalancing the business portfolio for the long term. In this regard, we are aiming for a 40% reduction in our Scope 1 and 2 emissions by 2025 applying current technologies. A further critical element of the strategy is establishing sustainable communities through a comprehensive land use approach.

Exxaro has maintained its leading ESG rating in the FTSE Russell ESG Index and is rated amongst the top 100 Emerging Market Performers according ranking by both Moody’s ESG Solutions and Vigeo Eiris.

Mgojo added, “Safety and zero harm remain critical performance indicators for our business sustainability and are amongst key social performance indicators in these index ratings and I am very pleased with our record safety performance of 5 years without a fatality, and our Lost Time Injury Frequency Rate (LTIFR) of 0.08 which is in line with our target. I commend all our teams for continuing to drive zero harm so effectively.”

Exxaro announced on Tuesday that the CEO, Mxolisi Mgojo plans to retire in July 2022. The board of directors has appointed CEO-designate, Dr Nombasa Tsengwa to succeed him as Chief Executive Officer, effective 1 August 2022.

Mgojo noted, “It has been an honour to serve as CEO of Exxaro during this period of transformation and growth, and I offer my sincerest thanks to our employees whose hard work and dedication have allowed us to achieve so much. I want to thank our stakeholders, viz., customers, communities, government, unions, colleagues, and shareholders, as well as the Board of Directors, for their ongoing support during my tenure. I have worked with Nombasa for many years, and the board and I are fully confident she will be an excellent leader for Exxaro. I look forward to working closely with her for the balance of my term to ensure a smooth transition.”

Financial results: For FY21 Group revenue increased 13% to R 32 771 million (FY20: R28 924 million) mainly due to the increase in coal revenue and the inclusion of renewable energy revenue from Cennergi for the full twelve months compared to nine months in FY20.

The 46% increase in consolidated group core EBITDA to R10 671 million (FY20: R7 291 million) was operationally driven by a 38% increase in Coal core EBITDA and the inclusion of Cennergi results for the full twelve months compared to only nine months in FY20.

Headline earnings increased 56% to R11 568 million (FY20: R7 417 million) mainly due to a 47% increase in group EBITDA and a 48% increase in equity-accounted income from SIOC, driven by high iron ore export prices and price premia. The weighted average number of shares (WANOS) decreased slightly to 247 million (FY20: 251 million) because of shares repurchased and cancelled in terms of the R1.5 billion share repurchase programme. The earnings increase and the change in WANOS equates to basic headline earnings per share (HEPS) of 4 683 cents per share (FY20: 2 955 cents per share).

Exxaro remains prudent in its capital allocation framework, in terms of returning cash to shareholders, managing debt, and selectively reinvesting for the growth of the business in a low carbon future.

Exxaro’s strategic approach to build its renewable energy business necessitated a change in its dividend policy, which was approved by the board of directors in March 2021. The revised dividend policy is based on a targeted cover ratio of 2.5 times to 3.5 times adjusted group earnings (and not only coal earnings) and a pass-through of the SIOC dividend.

In line with the revised policy, the board declared a gross final cash dividend, number 38 of 1 175 cents per share, for the year ended 31 December 2021, comprising: 2.5 times adjusted group earnings and a pass through of SIOC dividend receivable of R2 655 million.

After taxes and net finance costs, cash generated by operations was up 36% to R10 552 million (FY20: R7 770 million) and, together with the dividends received from investments of R9 991 million (FY20: R3 263 million), were sufficient to fund capital expenditure and ordinary dividends paid.

Following the disposal of Exxaro’s remaining shareholding in Tronox Holdings plc for R5 763 million, a special dividend of R1 364 million was paid to external shareholders, and a share repurchase programme of R1.5 billion implemented with the last trade executed on 2 November 2021.

In April 2021, Exxaro also successfully refinanced its R8 billion syndicated loan facility with various financial institutions. As a result, the group has sufficient liquidity to navigate through the current uncertain operating environment.

Coal business performance: Coal production volumes across all Exxaro’s mines (excluding buy-ins) decreased by 4 910 kt (-10%) to 42.2 Mt, mainly due to the impact of the logistical and market constraints as well as the ECC disposal on 3 September 2021.

Sales volumes decreased by 4 001 kt (-9%) to 42 759Mt, mainly on export volumes due to lower rail performance, partly offset by higher domestic sales volumes as export product was sold in the local market.

Coal revenue increased 13%, largely driven by an increase in revenue from its commercial mines as higher sales prices were achieved in all markets. Higher domestic sales volumes were offset by lower export volumes.

The two Cennergi windfarms were operating at the lower end of the historical range compared to planned capacity due to lower than expected windspeeds, increased maintenance in low wind periods, as well as the end of 5-year warranty inspections impacting energy generation negatively. Combined electricity generation was 724GWh (FY20: 727GWh based on 12-month period).

The Cennergi project finance debt of R4 700 million (FY20: R4 810 million) will mature over time and be fully settled in 2031. It has no recourse to the Exxaro balance sheet and is hedged through interest rate swaps at an effective rate of 11.9%.

Mgojo concluded, “Exxaro is well positioned for a meaningful role in the South African energy transition. We are supportive of the Paris Agreement and have committed to carbon neutrality by 2050. At the same time the energy generation mix in South Africa will continue to be dominated by coal, but renewables will play an increasing role. Our renewables business, Cennergi is the cornerstone on which we are building our energy focus. In the short term, we aim to establish our credentials as distributed energy solutions producer while reducing Exxaro’s carbon footprint. In the long-term, energy production and asset management will create an annuity income stream for the Group.

We have set an ambitious target for our new Exxaro Minerals business to represent 50% of expected coal EBITDA within 10 years and aim to scale purposefully and build from a position of strength to ensure that we align to Exxaro’s decarbonisation ambitions. Work is underway, using clearly-defined investment criteria to assess growth opportunities and ensure we invest in value accretive opportunities, aligned to our core competencies, and within geographies where we are able to execute.

Our competitive advantage is our mining and project development capabilities and the strength of our balance sheet to fund acquisitive growth in the development of our energy business and minerals strategy.”

Exxaro CEO, Mxolisi Mgojo will be hosting a webcast and call today, 3 March 2022 at 10h00 CAT to discuss the results.

The webcast can be accessed via the following link: https://www.corpcam.com/Exxaro03032022