EXXARO: STRIVING TOWARDS EQUALITY FOR WOMEN IN MINING 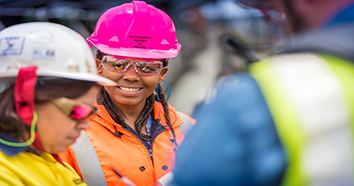 There is a renewed focus on empowering women to step into leadership roles in mining – a major talking point at the 11th Annual Women in Mining and Career Expo. With this in mind, companies like Exxaro have implemented initiatives to attract more women to the male-dominated industry.

Gender inequality in a male-dominated industry remains a concern, however, many local businesses are finding ways to bridge the gap. While top management roles are still largely retained by male players, females have been climbing the ranks, proving to be equally competent despite the stigma surrounding the industry.

“Women have unique attributes that can bring about balance, growth, and innovation, and we often don’t realise this,” Zelmia explained. “The mining industry challenged me to move out of a comfort zone and overcome the challenges that I was facing from within. I had to learn to believe that I had value to add and to trust in my abilities. I had to overcome my own shame triggers while navigating my way through this industry. And once I was able to do that, I found the industry and the process of extracting precious commodities from challenging resources - sustainably and innovatively - extremely fascinating. There is no going back from here.”

While Zelmia enjoys a prosperous career within the mining industry, there remains a concern that others are not aware of the rewards this sector has to offer.

Addressing this issue, Karien said, “What makes mining rewarding for me, is that I work with technical down to earth, straight-forward people – Engineers, Technicians, Project Managers, and Administrators – who want to learn what I have to offer. This is heart-warming for me as a female in a male-dominated industry,” she continued, “There is also no bigger reward for an Industrial-Organisational Psychologist than to see people taking responsibility for their personal growth and thriving as a result thereof.”

Even though gender inequality remains a concern within many industries, Exxaro is finding ways to bridge the gap by empowering women with their women in mining initiatives, like the redesign of personal protective equipment (PPE) to protect the women working underground. The company is also looking at implementing specialised panic buttons on female miners' lamps for women in distress.

Considering this, the responsibility to promote a more diverse mining sector falls onto industry leaders like Exxaro, who seeks to integrate inclusion and safety to facilitate diversity. An investment that surpasses gender and assists female employees in reaching their true potential.

Exxaro’s primary objective is to power better lives in Africa and beyond. Part of achieving our vision is creating a culture that celebrates gender diversity and encourages collaboration. Undoubtedly, the Women in Mining and Career Expo is just one platform to bring awareness to the challenges and rewards for women in mining.